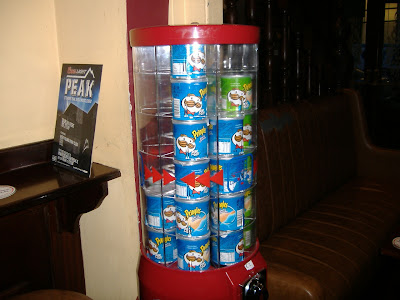 Five days seems like precious little time to get to know someone who has, somehow, managed to hack into your unconscious. Iâ€™m quite good at fending off random emotional connections but every once in a while, I slip. Logic doesnâ€™t go out of the window so much as it skulks around right outside of the door pounding to get in while other emotions take the fore.

And that can be OK. Been a long time since I let someone do pretty much what they wanted and resolved to deal with the aftermath pretty much on my own. Risky. Crapshoot. Reckless. Desperate, pathetic….the Bad Voice wants to take over here. But I canâ€™t let her, because the fourth day is evaporating when I realize what The Big Fucking Deal is.

The Big Fucking Deal, which eventually left me crying in sadness and happy relief in a pub in Dublin on a Saturday night. The Big Fucking Deal which is. Really? Something so very innocent, it can creep up on you like a soundless tsunami…an emotional rip-current.

So this man, my new Friend, Â who I barely know, yanno, who I let roam around my head, and then ask all manner of probing questions about my reactions as listened to myself Â (in a bit of stunned shock) respond with total candor…who didnâ€™t mind if I cried, just wanted to know why…this man managed to do something so simple it reduced me…no. Elevated me to tears. Â To feeling.

In a Dublin pub, at a pre-Munch Meet & Greet. Over here? You have to be vetted and you have a meeting before even going to a Munch. The Munches here in Dublin arenâ€™t the same free-for-all that they tend to be in the US, where anyone can look one up and show up. Ask me about it later but the point is I’m with a bunch of Irish pervs in a pub and weâ€™re waiting for this meting to start and my Friend has, oh-so generously, bought a mini-can of Pringle’s crisps (see how I use the lingo and everything? Iâ€™m so fucking cool) and is offering them round, and I try to hand back the can to him as Iâ€™ve had enough. He orders me to hold them.

â€œWhat, am I supposed to stand here and be your human Pringleâ€™s crisps dispenser?â€ I hold them formally in both hands, palms outstretched, with a smile worthy of Vanna in front of the illuminated flip panels of a Wheel of Fortune puzzle. He gives me that smile that I, sadly, cannot resist.

â€œYeah. In fact go offer them â€˜round to everyone else, just like you offered them to me.â€

I half smile and of course, immediately turn to the blonde to his right and curtsy and offer her a â€œ…Pringleâ€™s crisp, courtesy of the Mister.”

She laughs and takes one. I continue around the group, offering chips, and everyone takes one and jokes or makes a sly comment. One gentleman declined, and I drew a hand dramatically over my eyes.

â€œHow can I fulfill my Mission and Duty if you wonâ€™t even have one little crisp?â€ I was “rescued” by another lass who generously accepted my offer and I threw my arm around her in camaraderie. We laughed, and I completed my round. When I got back to where my Friend was sitting, he said â€œLovely. Except you didnâ€™t offer them to everyone like you offered them to me.â€

I couldnâ€™t read the degree of seriousness, and I was taken aback a bit. Now, mind, none of this dynamic was formally negotiated it just…happened, and I just…accepted it. It felt right. But, the rules, you see. One MUST negotiate…right?

So part of me was ready to tell him where to stick his fucking Pringleâ€™s can, but most of me…most of me was vaguely worried that Iâ€™d somehow failed to please. My brow furrowed as I eyed him warily.

â€œI asked you to offer them to the others the same way you offered them to me. You used both hands when you gave them to me. But you took your hand away there when you went round. A few times.â€

The crooked grin only sent me into a bit of a more spun out place, because I am usually good at accepting a correction but…but…

I felt something I couldnâ€™t identify, so of course I squished it down And of course that resulted in me not wanting to be around people. But that wasnâ€™t in the cards. Dinner was next. Then the actual Munch, for which I was now properly indoctrinated. I was feeling a bit Off. Couldnâ€™t place it.

Dinner was,Â incidentally, Â hilarious, an Irish Chinese Korean Karaoke freakshow, but you can ask me about that later too.

By the time we went to the Munch proper, my Friend had to leave for another event, and was going to meet up with me later. Part of me was relieved to be away for a moment, I was feeling some shit I couldnâ€™t fucking sort, and it was pissing me off.

Finally, I was at the Munch. Overwhelmed. The pub was full, everyone on the sidewalk was smoking, everyone inside was speaking loudly, and I started to melt down. But everyone was SO lovely, and so friendly, and so chatty, I was torn between soaking up the post-class feedback and running away to cry. The latter impulse finally won. It usually does.

I went to hide for a minute in the toilet. I sat down and my brain cleared and it came to me, clear and simple.

I was overwhelmed, and at a loss because of his correction of my service, but not for the reason I thought.

In order for him to have corrected me on the positioning of my hands when I was serving those silly crisps, he had to have noted what I was doing. He had to have watched, paid attention, marked and tracked it, and commented on it to me.

The knot that had been in my chest for hours unloosed even as my head moved to feeling tight and compressed.

This is the core of the symbiosis that I miss. Not only that someone cares enough to permit the vulnerability of being served but that they pay fucking attention, and let you know that they see what you are doing. And somehow? The correction wasnâ€™t crushing, it didn’t feel harsh or judgmental or any of the other things I can sometimes feel when corrected…it just…was. The previous days, the small services that Iâ€™d provided that he had acknowledged with a smile or nod or word or…whatever. These things are so precious. I miss them so much.

But I had pushed that need down and away because whats the fucking point of longing for rain in the desert in summertime?

I guess the point is that sometimes, out of the clear blue sky? Rain. Moistens your surprised upturned face and you can do nothing but drink in the fleeting sensation.