People are often curious as to why a particular play-style, pervy activity or kind of kink appeals while others leave you cold. I can’t speak for anyone but myself, but I’ll tell you about why I so love bottoming to rope bondage, and submission via rope.

It is important for me to feel connected with the person I play with, even if the type of scene we’re doing has the framework of something humiliating or frightening. One of the most connected forms of play in which I engage is rope bondage.

When I first became involved in the BDSM scene, I was at a play party watching several couples doing rope bondage scenes. There was a guy tying up some gals tits and a woman with some thin cord doing some kinda macramé shit on this guy’s twigs-and-berries and I watched, a bit puzzled. I didn’t get it. It seems really t. e..d…i…o…u…s and I soon wandered off to watch a scene where three people were beating the crap out of someone shuddering and wailing and screaming and…giggling? Yeah, giggling on the floor. That had drama! Excitement!! Action!!! This rope shit was not capturing my imagination. Like, at all.

My first dominant was really into a style of bondage commonly referred to as kinbaku or shibari in the USA. It’s a lot of rope, usually jute or hemp, and sometimes it is used as a way to suspend folks off of the ground, in defiance of several laws. Most notably, gravity. I wasn’t having any of it. As a fat chick, I was not at all interested in looking like a tied roast about to braise in a 450 degree oven, ya feel me?

But one of the things I love most about being submissive is that I’ve agreed to obey, and obedience turns me on. So, I found myself trussed, twisted and tied, and somewhat taken-aback when I found myself slowing down, my senses heightened, my state of mind smoothed out, yet amped up, as the ropes went on me for the first time. My dominant wasn’t much of a talker while he was in the midst of administering rope bondage, but I soon realized that the very act of him laying yard after yard of earthy hemp rope across my skin was its own form of communication. The rope was an extension of his touch, and remained in place even after his hands had passed on to the next wrap, looping the next tie around this wrist and that ankle, over, under and around my breasts. Then I was in this kind of between place, adrift, yet alert; present in my body in a way I’d never been before, and yet somehow diffused throughout the network of rope.

When I saw how he stepped back to study his handiwork, when he whispered to me how beautiful I looked at his disposal, at his mercy, in his rope, I felt beautiful. I wasn’t self-conscious about my body; my flesh was thrumming with limitless energy. I was alive, alert and at his command. That was a heady thing, and being in rope brings me to that space of feeling like the gorgeous, helpless captive all over again.

Even the act of having the rope removed became a wondrous process. The rope left beautiful marks that spoke eloquently of the pleasure, discomfort and yeah, sometimes outright pain of being bound. I was being released back into the Default World, and the connection between us was moving back into the ethereal plane. For a while, there had been a solid, physical manifestation of that connection, and that is a marvel to behold. 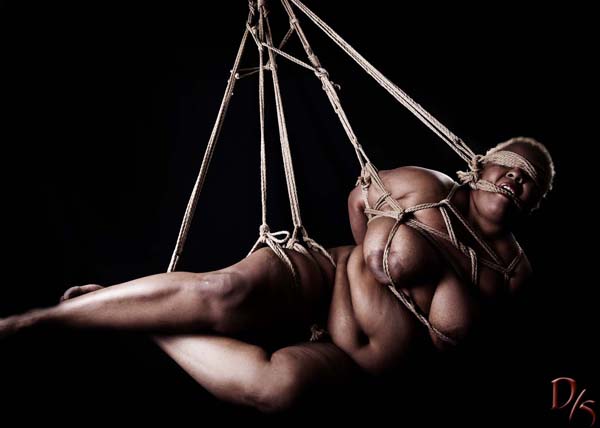 Why do I love rope bondage?

The loss of control over parts of my body is deeply intoxicating. The idea that movement itself, the one thing since birth that we struggle to achieve and maintain, is now in the hands of someone else — that is something dangerous. Excitingly so.

It occurs to me that the secret wormhole I find when doing bondage is not just the loss of control: it is the deeper sense that every segment of rope is touched and energized by the person applying the bondage. That focused intent, that specificity can elevate the inanimate rope to its own heightened state. It is as though every section of rope is imbued with and carries the energy, control and caress of the one who is in control of it.

As the bondage becomes more binding or more complex, it is as though you are held in a physical manifestation of the thoughts of the person slowly taking from you the control of your limbs, skin, body — rope bondage can get to the point where even your breathing is restricted by the rope top. Imagine if every caress you felt while making love lasted and abraded and caressed and marked your skin in an after-shock of taut tension and sensation.

It is an echo that intensifies instead of fading.

It is a restriction that frees you to struggle and relinquish your control.

If you add to that the many textures of rope, it is even more.

I have quite a few friends who are “riggers,” the term sometimes used for people who do the rope wrangling in a bondage scene. There’s a certain degree of technical skill needed to achieve the more complex types of rope bondage, and I do love being able to let myself go in the hands of those people who know what they’re doing. Sometimes, scenes can take weeks of prep, days of planning, and hours to execute. Sometimes they’re big, grandiose performances and I love that. Sometimes it’s just a simple piece of cotton rope around your wrists, holding your hands above your head as your lover whispers to you of the beautifully awful things they’re about to do to you. I love that, too.

…wanna read about my most recent excursion in rope? Check out

Why I Am Officially a Cannon Fan