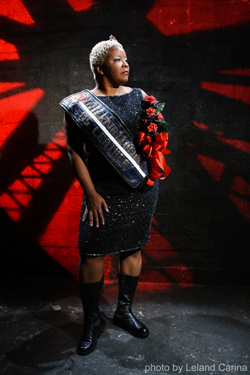 Youâ€™ve been very open about your sobriety.

Yes. And Iâ€™m really glad, because part of what was difficult for me was that shame. I had the surety that if people knew how fucked up I was, they wouldnâ€™t like me anymore.
The finalâ€”I was going to say nail in the coffin but no, this is the nailÂ out of the coffinâ€”was one morning I got up and I thought I was dying. Couldnâ€™t stand up, weak, shaking, vision narrowing to a tiny pinpoint. So I went over to SF Generalâ€”and I will tell you, I got triaged in an hour. They put me on an IV and ran all these tests. They gave me three bags of saline because I was severely dehydrated. And they ran a shitload of blood tests and said, â€œWe canâ€™t find anything.â€

I walked out, and at this point itâ€™s like 6:45 in the morning. I walk up to this bodega that opens at 7 a.m., and I stand and I wait. At 7:00, the dude comes out and opens the gate. I walked in, got a fifth of Jack Daniels, and I drank it. And I snapped back to normal. The shaking stopped, the nausea stopped, I was fine. I was going through withdrawal.

So, I went and I let myself into my friendâ€™s house and curled up on her couch, and I said, â€œI need help. Iâ€™m afraid that Iâ€™m dying and I donâ€™t know what to do.â€ So she and two of my friends found the only free inpatient medically-assisted rehab in Californiaâ€”one of three in the country that you donâ€™t have to pay forâ€”and brought me there. Itâ€™s not like the ones on TV. Itâ€™s not fancy; itâ€™s definitely utilitarian. It felt very much like being in a low-security prison, which it kind of is, you know? I was there for three weeks.

Now you have a book out.

Iâ€™m still like,Â Oh, itâ€™s just a little book. Itâ€™s not like a magnum opus. But I did manage to write it while working full-time and traveling an average of twice a month, and Iâ€™m proud of it because it was hard to write. Especially because, how do you present something thatâ€™s not core to your [own] sexuality, but is core to other peopleâ€™s sexuality? Itâ€™s challenging.

The Toybag Guide came about because I didnâ€™t see any books that dealt with this topic specifically. I wanted to give to those who struggle with feelings about judgment, about shame, and about self-worth a chance to see their desires in a different light. Taboo is about seeking things that are profane yet profound and often sacred. I talk about taboos on varying levels: taboos of body, taboos of interactions, social taboos. Some background, some anecdotal sharing, some thoughts on how to approach the topics. My main point? Donâ€™t be so afraid of the dark you canâ€™t enter it.

And again, specifically talking about issues of race play and other taboos around that, when I first started studying scene stuff and reading books, the first time I saw a depiction or an interview or anything from a submissive woman who was also black was one of the interviewees inÂ Different Loving. And I said to myself,Okay, thereâ€™s one. I was, like, I donâ€™t know where I fit here. So, if you donâ€™t see the hero, do you need to be the hero? I feel that in some ways, thatâ€™s what Iâ€™ve done.

How did you first discover that you were kinky?

I was 26, I was living in Los Angeles. I was sitting in this pub, Barneyâ€™s Beanery in West Hollywood, and this incredibly sexy green-eyed English musician with an amazing ass was totally hitting on me. As it turned out, he had just landed from the U.K., and was on tour with Van Morrison. He was staying at this incredibly expensive beautiful suite in Beverly Hills for a week.

So we went out on our date the next day, and at one point he basically dragged me into the bedroom and ripped off my clothes and slapped me around and had his belt around my neck and was saying all kinds of horrible things about what he was going to do to me, and the whole time Iâ€™m thinking, â€œOn paper, this is sexual assaultâ€¦â€ [But] I felt like there was something wrong with me because my reaction was, â€œOh, my God! Yes, please! More, more, more!â€ I asked him later, â€œIs this how you are with chicks?â€ and he said, â€œOnly when they want itâ€¦â€

Itâ€™s funny, when I first got involved with the scene and I was part of this household, the majordomo, as it were, kept â€œjokingâ€ about how whether my involvement with the scene was research for a book or play I was doing, and one day they would all show up in characters.

I also love the fact that because of my background in theater, I can tell a story in a way thatâ€™s theatrical. This helps with my presentation and my classes, because no one doesnâ€™t like to hear a message from the happy black lady. Itâ€™s like: â€œHi, yâ€™all, let me tell you all a little bit about the beatinâ€™ and spankinâ€™ â€.

Posted in IMsL, Media, SexIs and tagged Interviews
← Pringle’s Epiphany.My heart is but a Selaginella Lepidophylla… →