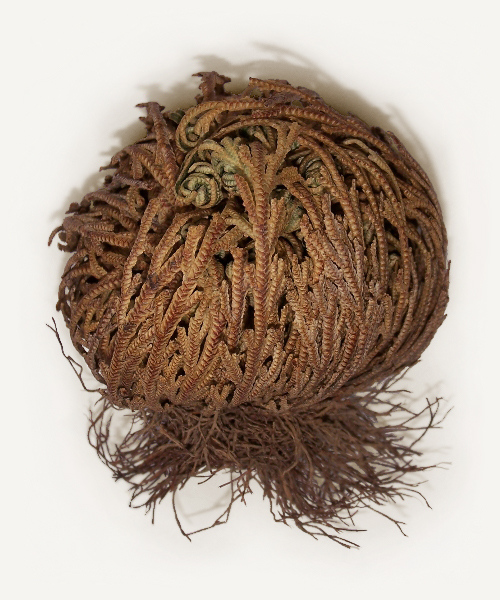 When I was in 6th grade, I went to the Museum of Natural History on one ofÂ many,Â manyÂ field trips. But this time, I bought something cool. It was called a Resurrection Plant. They are also known as The Rose of Jericho.

It was a weird, brown ball and on the card stapled to the top of the dusty packaging, it said that this was actually a living plant. I was dubious, but I absolutely trusted the AMONH, and knew they wouldn’t steer me wrong. And if they did, I sure as fuck would be back on the bus and demanding my money back!

I gave it to my Mother, and we put it into a dish with water, as indicated in the instructions. within a few hours, the spiky desiccated ball had relaxed a bit…cautiously, unfurling its stems and plumping its roots and soaking up the water, which we kept fresh as it disappeared into the now mossy lump.

Between that afternoon and the next morning, it opened so much it was kind of creepy.

I was impressed by the action of something that seemed so dead doing its thing so quickly, with just a little water.

The plant opened, grew, even made teeny flowers. And then of course, as was the way in our house, we forgot to water it…it got shoved behind something or other…and died. Or “died” in the case of this little guy, because when someone found it, months later, it was looking pretty much as it had before. A tight, dry ball. A little bigger than before, but dormant.

I was so thrilled and when I put it back into fresh water, it repeated its little miracle. Opened, flowered a bit, and grew. I deliberately pulled it from the bowl a few weeks later, and let it rest.

Years went by. I left home. My Mom and sisters flat was damaged in a fire. They moved. I left New York.

One summer I came back to visit and was stunned to see a weird looking flattened lumpy brown mass sitting amongst a cluster of other plants slowly eking out their final days in the kitchen. I asked if this was possibly the same Resurrection Plant I’d bought for my Mother in Elementary School!! What a miracle!! I turned in excitement. What a story that would make…

“No, its not.” Mom said. “You sent me THIS one back when you and Jack were driving to LA. Remember? You got it at the Grand Canyon or someplace…you don’t remember?”

No, No, I didn’t remember. My memory is shit.

I washed out the dusty bowl in which this new old plant sat, soaked it in water, and put it back on the windowsill. I watched it with that weird patience I occasionally have come over me. Hardly blinking because I was sure I would be able to see it move if I just held my breath and did not blink.

I think that plant needs to be my mantra for a while.

Even though it seems imposible to endure that cycle again and again, even though that plant has no control of when it gets fed…it lives. It doesn’t worry about where the next bit of heaven-sent life-giving moisture comes from. It gratefully takes what it is given when it receives it, and faithfully awaits the return of that gift when it returns.

Even as I’m feeling myself curl back into that dormant potentiality, even as it seems like a loss, I feel that growth in the interim. A few more blossoms to ponder, a few more new leaves that will one day see the sun and water again. One day.