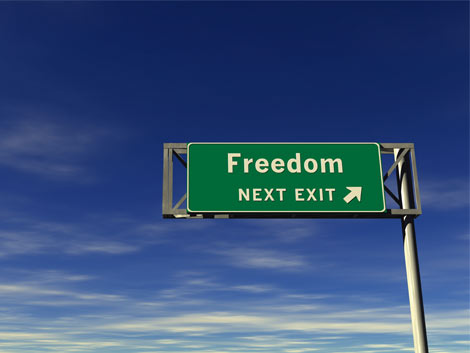 Sometimes, you gotta get off the highway.

On Sunday, September 5th, 2010, I got hit in the face with an epiphany about my journey in Leather, in slavery, that shifted my paradigm, re-routed a stifling blockage of self-pity, and enabled me to take back a part of me that felt broken and damaged.

It was a massive reset.

I was at the Master/Slave conference. I was looking forward to attending a class by Skip Chasey, and early on in the course of the discussion, he expounded on one of his more controversial positions: that mastery and slavery were arts that one could only be said to be engaging in if they were actively doing so. You couldn’t call yourself a master if you weren’t the owner of a slave, and an unowned slave wasn’t able to be called such. This was a sickening drop for me…and it only got worse when he referred to those who weren’t actively walking the path as â€œwannabeesâ€

See, I’ve been called to this path, this identity, for a long time now. But never actually owned. To have someone say that I was a wannabe because I’d not found the person with whom I’d clicked was…well. It wasn’t OK. I felt my face getting hotter and my throat closing. I held back tears. I wound up walking out of this class because I couldn’t get past my anger and disappointment and continue to be a positive presence in the room. My sitting there glowering wasn’t helping anyone. I rushed back to my room and cried. Raged. Cried some more.

The next day, I got it together enough to attend a â€œSlaves onlyâ€ group facilitated by Vi Johnson. I had my hand raised for most of the class but because I was sitting right next to and slightly behind Vi, I didn’t get called. Finally she reached over, took my hand, and told me to talk. I shared about my experience in the previous day’s class, how frustrated and, yeah, humiliated I’d felt. I started crying again, much to my dismay. But then I looked around and realized that many of the other slaves in the room were nodding assent, murmuring agreement on how disappointed they’d been at his choice of words. As I was talking about how devastated I was at having my work, my journey, my identity invalidated, Vi shook her finger at me. â€œYou know better. You know who you are,â€ she began, and reminded me of how important it is to know yourself, and to have unshakable faith. That slaveryÂ wasn’t only who you were with, it was who youÂ were.

One of Skip’s slaves was in the room with us, and after raising his hand, urged me to bring my concerns to Skip directly â€œI know he would be very distressed to know you were upset by this,â€ he said â€œif you feel OK doing so, it would be great for you to talk to him.â€

So, I did. I worked up the nerve and pulled him aside later that day. I was a bit anxious: I am not much for confronting people to say â€œHey, you said something I didnâ€™t like!â€ but I was determined. He was quite gracious and actually wound up delaying going to a class he’d been on his way to attend in order to finish our discussion. He apologized, and explained he now saw that his choice of words wasn’t the greatest.

â€œI can see that now,â€ I replied. “But the term is used disparagingly among us usually for people who aren’t sincere, or invested. It doesn’t break down that way. You and I have differing opinions on what makes a slave or a master able to call themselves such, but wouldn’tÂ aspirantÂ orÂ acolyteÂ be better terms for those striving towards mastery or slavery?â€

He agreed that those were more accurate to his meaning, apologized again, and we had a really good, grounded talk.

And I felt better.

The next morning, at the keynote brunch, Skip was slated to field questions from the group but before he did, he said he wanted to address an issue. He started talking and I felt myself flushing hot as I realized he was talking about our conversation of the day before. Without naming my name, he mentioned that someone whom he respected had called him on something he’d said. He repeated the bones of our discussion from the night before, and he apologized. He said that, after the first person had spoken to him, others had stepped forward tooÂ (I guess the slave’s roundtable got some S-Types all empowered!)Â and he realized he could have used a different term.

I stood up thereafter, identified myself to the room as the initial complainant, thanked him for his words and said I had a question. As an aspirantÂ (Ganesha knows I came ____this ____ close to saying wannabe!)Â who had been walking the path for a long while without finding a suitable person to hand over my submission, did he have any words of encouragement? How do we keep our chin up when so many around us manage to attain these things with seeming ease?

His response was thoughtful, measured, and enraged me immediately.

His said something along the lines of â€œWhen the student is ready, the teacher will appear.â€ asserting that these things happen when we, in the fullness of time, are ready, truly ready, to receive them

â€œHow dare he!! Like, so, what? This whole time I had my motherfucking thumb up my ass?! I WASN’T READY!? For fuck’s sake I—“

I felt a palpable shake. A voice in the back of my chest and what felt like an invisible cinderblock to my head.

I shook. Hard. My Higher Power was in full effect and I was paralyzed.

I took a long shuddering breath.

I wasnâ€™t. I wasn’t ready. I saw that my counting the decade and a half of my longing, my process, my time in the scene as my looking but not finding, alone and frustrated was hubris. Ignorance.

Fuck, I wasn’t even sure I was readyÂ now.

I realized in that moment? I had no idea what the fuck I was doing.

I had not ever been ready.

My counting years of waiting as a source of pain and shame was specious.

All this…all this, was new. I was a blank slate and holy fuck was I new.

I had 12 days in which to delve into a new way of looking at myself, my submission, my relationships, my failings, my victories, before I was shoved over yet another emotional cliff.

On Friday, September 17th, 2010 I met @TheDominantGuy. On Saturday September 18th, it became clear to me there was something shifting again. By Sunday September 19th I knew what the epiphanaic reset had been about: it was a foreshadowing of the even fucking crazier shit coming my way, and this wasn’t going to be simple or easy but it was going to be good.

And here we are, about a year later.

I’ve spent the past couple of days pulling together a list, and re-reading, all of the blog posts I’ve written about this journey since the first one I wrote about TDG and I posted that firstÂ attempt to capture the ineffableÂ on September 22nd, 2010.

We are rolling up to a year since that heavy epiphany. Since I realized I was freed by being humbled by my own ignorance. And we are feeling pretty good in the face of this milestone. I know even more explicitly who I am, and I know I can survive some pretty terrific emotional pressures. I’m grateful to Skip for his â€œpoor choice of wordsâ€ and I did, subsequently, thank him for his part in my breaking this new ground.

And about The Dominant Guy I will only say this right now…I would not give up one moment of the blistering joy and freezing pain I have experienced thus far…not one moment of it.

And am grateful…so grateful…that I was ready to start over.